Help my brother Vivek Get Back At Life! - Matterhere
Are your products and/ services do relate to this; then why you are waiting, ADVERTISE HERE.
UGC NET PAPER-I (ENGLISH) EXCLUSIVE ONLINE COURSE @ JUST RS 399 /- ONLY, ugco.net.

Home Help my brother Vivek Get Back At Life!

Help my brother Vivek Get Back At Life!

Description: #Kindly #Please #Help my one and only loving brother Vivek who has lost both his hands in an electrical shock accident which happened two months ago. Both his hands were amputated. Now, the only hope is to get ADVANCED ARTIFICIAL LIMBS. Our family has already spent 15 Lakhs for the treatment. Now we are raising funds for him for the arrangement of prosthetic hands. Kindly help in whatever way possible and help him lead his normal life. A little from everyone makes a big for someone. 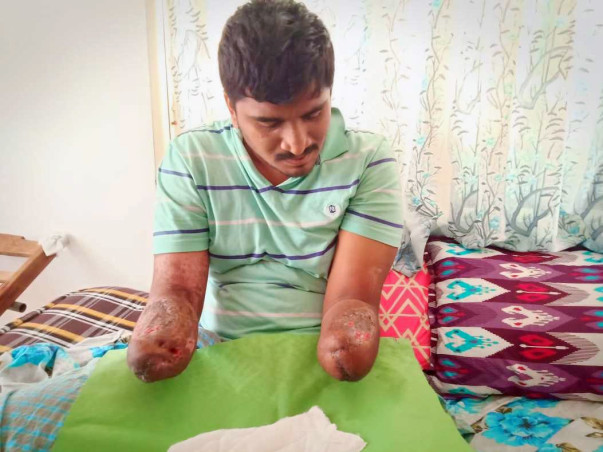 About: As he turned 23 in May, Vivekananda blew out his candle with a wide smile and went on a ride with his friends. He is an energetic and fun-to-be-with kind of person. He made a wish to keep his family happy that day. Little did he know then that starting this year, his life would be difficult. 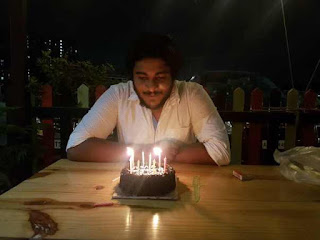 Vivekananda was studious from his childhood. Seeing all the hardships his parents had gone through in getting his education, he always wanted to help his family. After graduating from Gayatri Vidya Parishad College of Engineering, he secured a job at Model N, India and proudly took the responsibility of supporting of his family. His parents had high hopes for their son's future.
On September 12th, he met with an electric shock accident (electrocuted) near his home. He fell unconscious and his friend and neighbours helped taking him to nearby Kondapur Govt. Hospital. Doctors identified it to be a major accident after checking his burnt hands.
“Please kill me. I’m not able to bear this pain”, he shouted so loud in pain with his eyes closed. Doctors gave him first aid and asked his friend to take him to the super specialty hospital as treatment cannot be done in normal hospitals. He was immediately admitted to Citi Neuro Center (Banjara hills Road Number 12) and later that night an immediate surgery was scheduled. 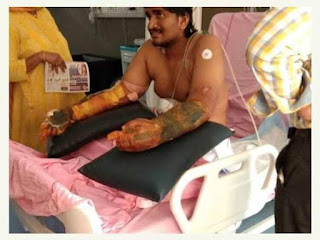 From that day onwards, the team has performed multiple surgeries every five days to remove the dead tissues. Doctors have done skin grafting partly, to about 60% of the burnt hand leaving the remaining part untouched. One evening, his parents were taken into the consulting room and slowly they revealed the case -  “The electric burns were so severe that it damaged the dual supply arteries in the right hand. There is no blood flow in the right hand and it must be amputated otherwise the remaining part of the body will get infectious. ” 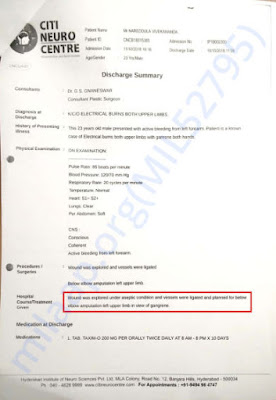 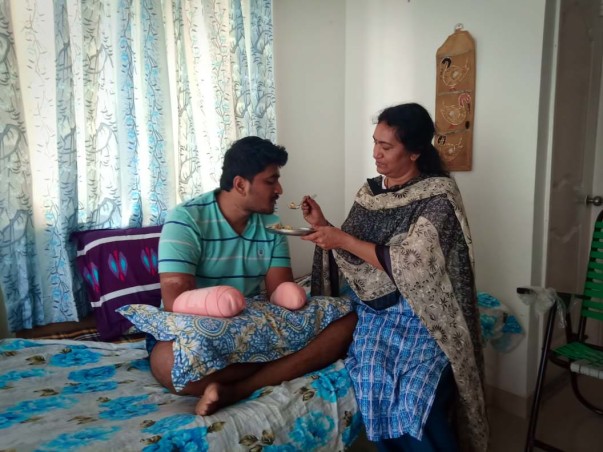 Taking sometime after hearing the news, he made up his mind with what’s happening to him. He stood back strong and had his hope on the left hand. He made up his mind that he would make his left hand the dominant one. He thought of working harder. He thought of practicing badminton with left hand. He thought of practicing how to write with his left hand. Left hand became his only hope.
But God didn’t bless him even that. One day, the only artery that is supplying the blood in the left hand burst and again he was taken into the emergency ward. The problem with electric shock is we never know what happens next. He lost 700 ml of blood that day and his blood level point fell to 6 . He just fought with death and won again. But during this battle, he had to lose his hope on the left hand too.
“We’re sorry, we will have to amputate the left hand”, the doctor said pressing Vivek’s left hand fingers with needle to indicate there is no blood flow after the nerve burst incident.
“Please save one hand atleast”, his mother begged and broke down to tears again.

But no God responded to her prayers and no doctor could help Vivek that day and he got his left hand amputated. Coding is his passion and  he will not be able to use laptop ever again with his hands. He will not be able to eat his own food, hold a glass or even button his own shirt. But this time he didn’t cry. He was determined and strong. He motivated his parents who broke down. He just prayed and wished everything would be fine. 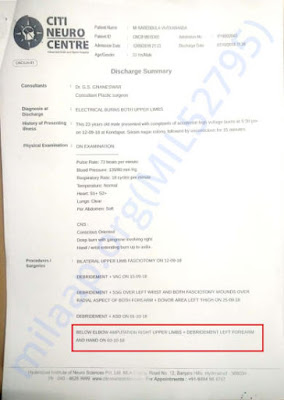 Everything went blank for him and his family.  One day his Doctor showed him the technology that’s been developing in the world. There are prosthetics for the people who have no limbs. Using them will let one to be independent. So prosthetics became his only hope. But knowing its cost and his family's financial status, he is losing hope on even that. The functional prosthetics cost about 70 lakhs (each hand costs 35 lakhs). His family knows  that if they can’t arrange the money, their son would not be able to lead a normal life. His father is a teacher and mother - a home-maker. Their income and savings are all used for his treatment and now they don’t know whom to turn to.
We just wish him to be energetic and happy again. Please help him! 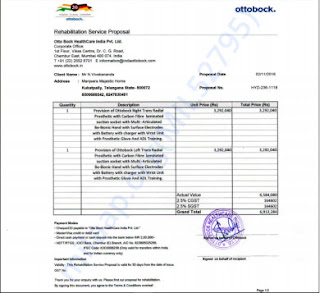