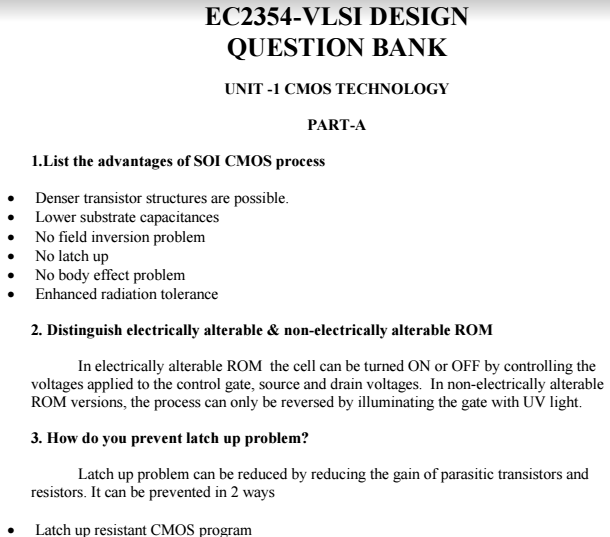 9.What is pull up device?
A device connected so as to pull the output voltage to the upper supply voltage usually VDD is called pull up device.

12.What is Channel-length modulation?
The current between drain and source terminals is constant and independent of the applied voltage over the terminals. This is not entirely correct. The effective length of the conductive channel is actually modulated by the applied V
DS,
increasing V
DS
causes the depletion region at the drain junction to grow, reducing the length of the effective channel.

13. What is Latch – up?
Latch up is a condition in which the parasitic components give rise to the establishment of low resistance conducting paths between V
DD
with disastrous results. Careful control during fabrication is necessary to avoid this problem.
<PDF Download>

14.What is Stick Diagram?
It is used to convey information through the use of color code. Also it is the cartoon of a chip layout.

15.What are the uses of Stick diagram?
_ It can be drawn much easier and faster than a complex layout. _ These are especially important tools for layout built from large cells.

19.What is Body effect?
The threshold volatge VT is not a constant w. r. to the voltage difference between the substrate and the source of MOS transistor. This effect is called substrate-bias effect or body effect.

22.What is LOCOS?
LOCOS mean Local Oxidation of Silicon. This is one type of oxide construction.

23.What is SWAMI?
SWAMI means Side Wall Masked Isolation. It is used to reduce bird’s beak effect.
24.What is LDD? LDD means Lightly Doped Drain structures. It is used for implantation of n-in n-well process. T

32.What is silicide?
The combination of Silicon and tantalum is known as Silicide. It is used as gate materials in polysilicon interconnect.

UNIT – 2
CIRCUIT CHARACTERIZATION AND SIMULATION PART-A
1.What is the fundamental goal in Device modeling?
To obtain the functional relationship among the terminal electrical variables of the device that is to be modeled.

4.What is pull up device?
A device connected so as to pull the output voltage to the upper supply voltage usually VDD is called pull up device.

8.What is Stick Diagram?
It is used to convey information through the use of color code. Also it is the cartoon of a chip layout.

9.What are the uses of Stick diagram?
_ It can be drawn much easier and faster than a complex layout. _ These are especially important tools for layout built from large cells.

9.Why CMOS technology is most useful for analog functions?
The first reason is that CMOS is now by far the most widely available IC technology. Most CMOS Asics and CMOS standard products are now being manufactured than bipolar ICs. The second reason is that increased levels of integration require mixing analog and digital functions on the same IC: this has forced designers to find ways to use CMOS technology to implement analog functions.

10.What are the features of standard celled ASICs?
All mask layers are customized- transistors and interconnect. Custom blocks can be embedded. Manufacturing lead time is about eight weeks.

15.Describe the steps in ASIC design flow?
• Design entry. Enter the design into an ASIC design system, either using a hardware description language (HDL) or schematic entry.
• Logic synthesis. Use an HDL (VHDL or Verilog) and a logic synthesis tool to produce a net list – a description of the logic cells and their connections.
• System partitioning. Divide a large system into ASIC- sized pieces.
• Prelayout simulation. Check to see if the design functions correctly.
• Floor planning. Arrange the blocks of the net list on the chip.
• Placement. Decide the locations of cells in a block.
• Routing. Make the connections between cells and blocks.
• Extraction. Determine the resistance and capacitance of the interconnect.
• Post layout simulation. Check to see the design still works with the added loads of the interconnect.

16.Give the application of PLA
Design and testing of digital circuits

17. What is the full custom ASIC design?
In a full custom ASIC, an engineer designs some or all of the logic cells, circuits or layout specifically for one ASIC. It makes sense to take this approach only if there are no suitable existing cell libraries available that can be used for the entire design.

21. What is a FPGA?
A field programmable gate array (FPGA) is a programmable logic device that supports implementation of relatively large logic circuits. FPGAs can be used to
implement a logic circuit with more than 20,000 gates whereas a CPLD can implement circuits of upto about 20,000 equivalent gates.

23.What is an antifuse?
An antifuse is normally high resistance (>). On application of appropriateΩ100M programming voltages, the antifuse is changed permanently to a low-resistance ).Ωstructure (200-500
24. What are the different levels of design abstraction at physical design.
Architectural or functional level ฀ Register Transfer-level (RTL) ฀ Logic level ฀ Circuit level ฀

25.What are macros?
The logic cells in a gate-array library are often called macros.

26. What are Programmable Interconnects ?
In a PAL, the device is programmed by changing the characteristics of the switching element. An alternative would be to program the routing.

5.What is the need for testing?
IC fabrication is very complex process. SO, there may be any imperfection occur in any one of the stage. This imperfection may affect the result. So testing is necessary to find out which IC is good and which IC is bad.

8. Mention the defects that occur in a chip?
a) layer-to-layer shorts
b) discontinous wires c) thin-oxide shorts to substrate or well

11. What is meant by fault models?
Fault model is a model for how faults occur and their impact on circuits.

12. Give some examples of fault models?
i. Stuck-At Faults ii. Short-Circuit and Open-Circuit Faults

13. What is stuck – at fault?
With this model, a faulty gate input is modeled as a “stuck at zero” or “stuck at one”. These faults most frequently occur due to thin-oxide shorts or metal-to-metal shorts.

14. What is meant by observability?
The observability of a particular internal circuit node is the degree to which one can observe that node at the outputs of an integrated circuit.

15. What is meant by controllability?
The controllability of an internal circuit node within a chip is a measure of the ease of setting the node to a 1 or 0 state.

17. What is fault grading?
Fault grading consists of two steps. First, the node to be faulted is selected. A simulation is run with no faults inserted, and the results of this simulation are saved. Each node or line to be faulted is set to 0 and then 1 and the test vector set is applied. If and when a discrepancy is detected between the faulted circuit response and the good circuit response, the fault is said to be detected and the simulation is stopped.

18. Mention the ideas to increase the speed of fault simulation?
a. parallel simulation b. concurrent simulation

19. What is fault sampling?
An approach to fault analysis is known as fault sampling. This is used in circuits where it is impossible to fault every node in the circuit. Nodes are randomly selected and faulted. The resulting fault detection rate may be statistically inferred from the number of faults that are detected in the fault set and the size of the set. The randomly selected faults are unbiased. It will determine whether the fault coverage exceeds a desired level.

20. What are the approaches in design for testability?
a. ad hoc testing b. scan-based approaches c. self-test and built-in testing

23. What are the two tenets in LSSD?
a. The circuit is level-sensitive. b.Each register may be converted to a serial shift register.

23. What are the self-test techniques?
a. Signature analysis and BILBO b. Memory self-test
c. Iterative logic array testing

24. What is known as BILBO?
Signature analysis can be merged with the scan technique to create a structure known as BILBO- for Built In Logic Block Observation.

25. What is known as IDDQ testing?
A popular method of testing for bridging faults is called IDDQ or currentsupply monitoring. This relies on the fact that when a complementary CMOS
logic gate is not switching, it draws no DC current. When a bridging fault occurs, for some combination of input conditions a measurable DC I
DD
will flow.

26. What are the applications of chip level test techniques?
a. Regular logic arrays b. Memories c. Random logic

27. What is boundary scan?
The increasing complexity of boards and the movement to technologies like multichip modules and surface-mount technologies resulted in system designers agreeing on a unified scan-based methodology for testing chips at the board. This is called boundary scan.

28. What is the test access port?
The Test Access Port (TAP) is a definition of the interface that needs to be included in an IC to make it capable of being included in a boundary-scan architecture. The port has four or five single bit connections, as follows:
TCK(The Test Clock Input) ฀ TMS(The Test Mode Select) ฀ TDI(The Test Data Input) ฀ TDO(The Test Data Output) ฀ It also has an optional signal
TRST*(The Test Reset Signal) ฀

30. What is the TAP controller?
The TAP controller is a 16-state FSM that proceeds from state to state based on the TCK and TMS signals. It provides signals that control the test data registers, and the instruction register. These include serial-shift clocks and update clocks.

31. What is known as test data register?
The test-data registers are used to set the inputs of modules to be tested, and to collect the results of running tests.

32. What is known as boundary scan register?
The boundary scan register is a special case of a data register. It allows circuit-board interconnections to be tested, external components tested, and the state of chip digital I/Os to be sampled.
33. Mention the levels at which testing of a chip can be done? a) At the wafer level b) At the packaged-chip level c) At the board level d) At the system level e) In the field

2. What is a task in verilog?
A task is like a procedure, it provides the ability to execute common pieces of code from several different places in a description

4.Mention the four key words used for looping in verilog
while, for, repeat, forever

5.Give the basic difference between tasks and functions.
Functions always return a single value. They cannot have output or in-out arguments. Tasks don’t return a value, but can pass multiple values through output and inout arguments.

9.In behavioral modeling specify the two most basic statements.
Initial and always statements

9. What is the structural gate-level modeling?
Structural modeling describes a digital logic networks in terms of the components that make up the system. Gate-level modeling is based on using primitive logic gates and specifying how they are wired together.

11. What are identifiers?
Identifiers are names of modules, variables and other objects that we can reference in the design. Identifiers consists of upper and lower case letters, digits 0 through 9, the underscore character(_) and the dollar sign($). It must be a single group of characters. Examples: A014, a ,b, in_o, s_out

12. What are the value sets in Verilog?
Verilog supports four levels for the values needed to describe hardware referred to as value sets.

17. What are gate primitives?
Verilog supports basic logic gates as predefined primitives. Primitive logic function keyword provide the basics for structural modeling at gate level. These primitives are instantiated like modules except that they are predefined in verilog and do not need a module definition. The important operations are and, nand, or, xor, xnor, and buf(non-inverting drive buffer).