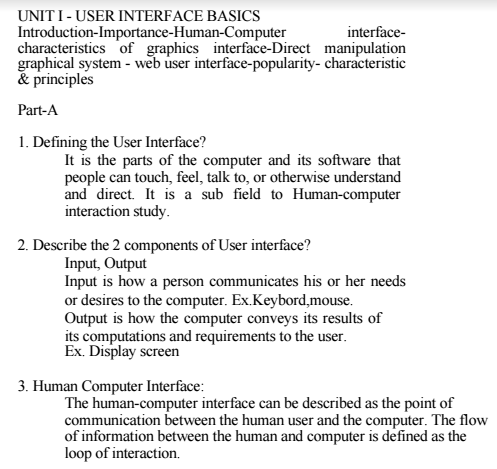 Part-A
1. Defining the User Interface?
It is the parts of the computer and its software that people can touch, feel, talk to, or otherwise understand and direct. It is a sub field to Human-computer interaction study.

2. Describe the 2 components of User interface?
Input, Output Input is how a person communicates his or her needs or desires to the computer. Ex.Keybord,mouse. Output is how the computer conveys its results of its Ex. computations Display screen and requirements to the user.

8. Direct Manipulation System:
Direction manipulation system is one in which the user is able to select an object and then specify which actions are to be taken. . System is portrayed as extension of real
world . Continuous visibility of objects and actions . Virtual reality . WYSIWYG . What you see is what you get . Actions are rapid and incremental with visible display of results . Incremental actions are easily reversible.

10.Define Predictability ?
. The user should be able to anticipate the natural progression of each task. . Provide distinct and recognizable screen elements . Provide cues to the result of an action to be performed . All expectations should be fulfilled uniformly and completely.

11. What is Transparency ?
. Permit the user to focus on the task or job, without concern for the mechanics of the interface. . Workings and reminders of workings inside the computer should be invisible to the user .

12.Define DNS?
The server-name portion of the URL is resolved into an IP address using the global, distributed Internet database known as the Domain Name System (DNS). This IP address is necessary to contact the Web server.

15. Write notes on Flexibility ?
. A system must be sensitive to the differing needs of its users, enabling a level and type of performance based upon:
• . Each user’s knowledge and skills
• . Each user’s experience
• . Each user’s personal preference
• Each user’s habits
• . The conditions at that moment

PART-A. 1. What Comprises Good Design?
. Understanding of people, how we see, understand, and think . how information must be
visually presented to enhance human acceptance and comprehension . how eye and hand movements must flow to minimize the potential for fatigue and injury . Must consider the capabilities and limitations of the hardware and software of the human-computer interface .

3.Define Graphical User Interface:
“A graphical system consists of objects and actions. Objects are what people see on the screen. They are manipulated as a single unit. A well-designed system keeps users focused on the objects, not on how to carry out actions.”

4. What is Persistence:
The maintenance of a state once it is established. An object’s state hould always be automatically preserved when the user changes it.

5.Describe the Principles of Good Screen Design?
A well-designed screen: . Reflects the capabilities, needs, and tasks of its users . Is developed within the physical constraints imposed by the hardware on which it is displayed. . Effectively utilizes the capabilities of its controlling software . Achieves the business objectives of the system for which it is designed .

6. Give some Common Usability Problems? . Ambiguous menus and icons . Languages that permit only single-direction movement through a system . Input and direct manipulation limits . Highlighting and selection limitations . Unclear step sequences . More steps to manage the interface than to perform tasks .

8. Define the components of Memory.
There two components: Long term memory contains the knowledge we posses. Short termreceives information from either the senses or the long term memory.

9.What is Information Processing?
The information that our senses collect that is deemed important enough to do something about then has to be processed insome meaningful way.

10. What are the main Functions of Menus?
. Navigation to a new menu . Execute an action or procedure . Displaying information . Data or parameter input .

11. Write some Characteristics of device Based Controls?
. To point an object on the screen. . To select the object or identify it as the focus of attention . To drag an object across the screen . To draw somet hing free form on the scree n . To track or follo w a movi ng object . To orient or position an object . To enter or manipulate data or information

12.Define the causes for Inconsistency ?
. More prepar ation time and less produc tion time . More freque nt change s in proced ures . More error-tolerant systems (because errors are more likely) . More kinds of documentation . More time to find information in documents . More unlearning and learning when systems are changed .
13.What is Item arrangement?
.Align alternatives or choices into single columns whenever possible . If a horizontal orientation of descriptions must be maintained, organize for left to right reading.
14. Define about Phrasing the menu?
A menu must communicate to the user information about:
• the nature and purpose of the menu itself
• the nature and purpose of each presented choice
• How the proper choice may be selected.
15. Write about Web site navigation?
Web site Navigation focuses specifically on website navigation design It will review website organizational schemes, the navigational components including browser command button ,links, website toolbars and command butt and the characteristics and the components of a website.

16. .What is Pie Menu ?
A pie menu is a circular representation of menu items,
that can be used as an alternative to a pull-down or pop-up menu.

PART -B (16 MARKS)
1. Explain the importance of human consideration in UI design with suitable example? (16)
2. What are the important human Characteristics that influence the Interface Design process? Discuss. (16)
3. What is requirement analysis? What are the methods involved in it? What is the impact of it on UI design? (16)
4. Discuss the process involved in understanding the user’s mental model in detail. (16)
5. What are the guidelines to be followed while designing a Conceptual model? Explain. (16)
6. List the qualities that provide a visually pleasing composition for the screen design and discuss. (16)
7. Explain briefly about the Structure of Menus and how they can be phrased. (16)
8. Define and explain the components of Statistical Graphics. (16)
9. Explain the types of Statistical Graphics? (16)
10. Discuss briefly about Navigating Menus? (16)
11. Explain the Kinds of Graphical Menu? (16)

4.Define Touch screen?
A touch screen is an electronic visual display that can detect the presence and location of a touch within the display area. The term generally refers to touching the device with a finger or hand. Touch screens can also sense other passive objects,

5. What is Pull-down Menus & Drop-down Menus?
Pull-down menus are menus that the user can "pull down" from the menu bar that traverses the top of the screen. On some platforms these are called "drop down" menus because the user does not need to hold the mouse button down in order for the menu to remain visible.

6. Write note on Events ?
An "event," with respect to user interfaces, is any function initiated by the user. Selecting
something from a pull-down menu, clicking a button or a checkbox, and closing a window are all examples of events.

7. What are all the three ways for a user to access the cmdExit (command button) ?
* Click on the button * Use the keyboard short-cut, ALT + X, if the programmer has used E&xit in the Caption so that X will be a "hot key" to use with ALT key. * Use the ESC key (Escape), if the Cancel Property of cmdExit has been set to True by the programmer (at Design time).