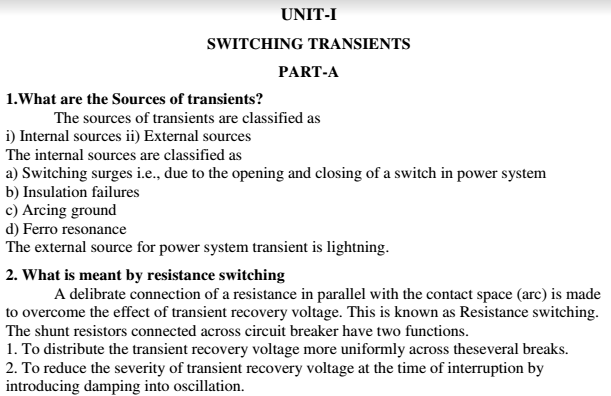 3. What is capacitance switching?
The shunt capacitors are employed to correct a lagging power factor, or in some cases, to provide voltage support for the system. In some applications they are switched in and out quite frequently as the system load varies and the system voltage fluctuates. The switching operations are nontrivial and should be carefully considered when designing capacitor banks and their associated switching equipment. This is called as capacitance switching. 4.What are the causes of switching surges?

5.What are the observations in RLC circuit?
6.Draw the equivalent circuit for interrupting the resistor current.
7.What is meant by load switching?
8.Define normal and abnormal switching transients.
9.What are the effects of source regulation?
10.Draw double frequency transient circuit with an example.
11.Give the relation between time constant of parallel and series circuit.
12.What is the need for resistance switching?
<PDF Download>

2. Explain in detail about,
(i) Resistance switching and
(ii) Load switching with their equivalent circuits.

3. Explain the load switching in both normal and abnormal conditions with neat
sketches.

2.Give the concept of traveling wave in brief.
Any disturbance on a transmission line (or) system such as sudden opening or closing of line, a short circuit or a fault results in the development of over voltages or over current at that point. This disturbance propagates as a travelling wave to the ends of the line (or) to a termination, such as a substation. Usually these travelling waves are high frequency disturbances and travel as waves. They may be reflected, transmitted, attenuated or distorted during propagation until the energy is absorbed. 3.What are the specifications of a traveling wave?

4.Write the expression for series and shunt lumped parameters in distributed lines.
5.Define standing waves and natural frequencies.
6.What is meant by reflection and refraction of traveling waves.

2. What is meant by distribution of voltage in a power system?
In an integrated power system the voltage produced will be distributed to the consumer ends through transmission line .If a fault occurs at transmission line then the CB operates and interrupt the fault current. During the interruption of fault the voltage will be distributed along the lines according to its added impedance.

4.What are the applications of EMTP?
The EMTP is a comprehensive computer program designed to solve electrical transient problems in lumpy circuits, distributed circuits. This program is capable of solving steady-state circuit problems. Transient analysis can be carried out in circuits with any arbitrary configuration of lumped parameters (R, L and C). Transmission lines with distributed parameters, transposed (or) untransposed, can be included in the network.

5.What is load rejection?
6.How does a surge occur during switching?
7.What meant by distribution of voltage in a power system?
8.What is meant by line dropping?
9.Explain the over voltage induced by faults.
10.What are the switching surges on integrated system?
11.Explain EMTP for transient computation.
<PDF Download>