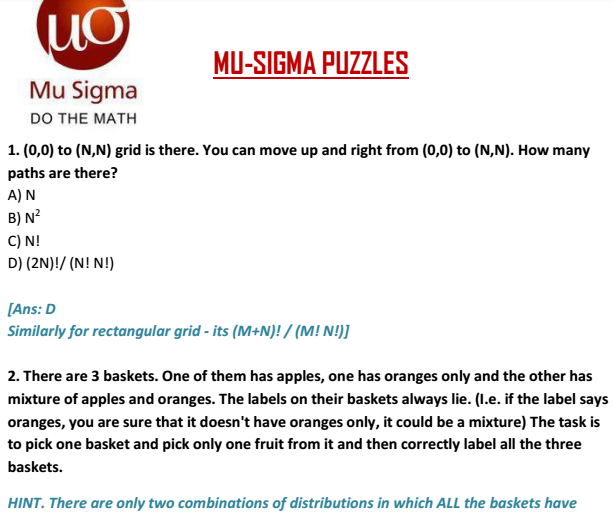 2. There are 3 baskets. One of them has apples, one has oranges only and the other has mixture of apples and oranges. The labels on their baskets always lie. (I.e. if the label says oranges, you are sure that it doesn't have oranges only, it could be a mixture) The task is to pick one basket and pick only one fruit from it and then correctly label all the three baskets.
HINT. There are only two combinations of distributions in which ALL the baskets have wrong labels. By picking a fruit from the one labelled MIXTURE, it is possible to tell what the baskets have.

3. You have 8 balls. One of them is defective and weighs less than others. You have a balance to measure balls against each other. In 2 weightings how do you find the defective one?
[Ans: Hint.
Divide the balls in 3 parts. 3+3+2.
Weigh (3, 3) balls, that is the 1st and the 2nd set. If they are equal, the defective or the lightest ball in within the other 2 balls.]

4. Why is a manhole cover round?
HINT. The diagonal of a square hole is larger than the side of a cover!
Alternate answers: 1. Round covers can be transported by one person, because they can be rolled on their edge. 2. A round cover doesn't need to be rotated to fit over a hole.

5. How many cars are there in the USA?

11. What seven-letter word has hundreds of letters in it?
[Ans. Hundred]

12. If you had a ton of feathers and a ton of stones which would be heavier?
[Ans. Neither. They both weigh a ton.]

13. Tom's mother has three children. One is named April, one is named May. What is the third one named?
[Ans. Tom]

14. Two women apply for a job. They are identical and have the same mother, father and birthday. The interviewer asks, "Are you twins?" to which they honestly reply, "No". How is this possible?
[Ans. They are triplets.]

15. How far can a dog run into the forest?
[Ans. Halfway. After that it will be running out of the forest.]

19. A plane crashed on the border or US and Canada. Where do they bury the survivors?
[Ans. You don't bury survivors]

20. Five pigeons are sitting on a fence. The farmer comes out and shoots one. How many are left?
[Ans. None, they all flew away because of the noise]

22. On Sunday, how many TOI Newspapers will be sold in Bhubaneswar?
[Ans. On Sundays, all the offices are closed and so no newspaper will reach the offices. Regarding Hostels, they are around 30 engineering colleges in Bhubaneswar and all of them have around 540 students living in hostels (except KIIT) with 3 living in each room. There are around 600 families living in the city. So, it gives 270+600 = 870 people. Regarding KIIT, there are 10 boys’ hostels and 4 girl’s hostels with 300 rooms in each hostel. So, it gives around 4200. So the total newspapers sold in Bhubaneswar will be around 4200+870 = around 5500.]

* To get figures, tables, answers and more, download the MU-SIGMA Puzzles Questions and Answers with Explanations PDF.