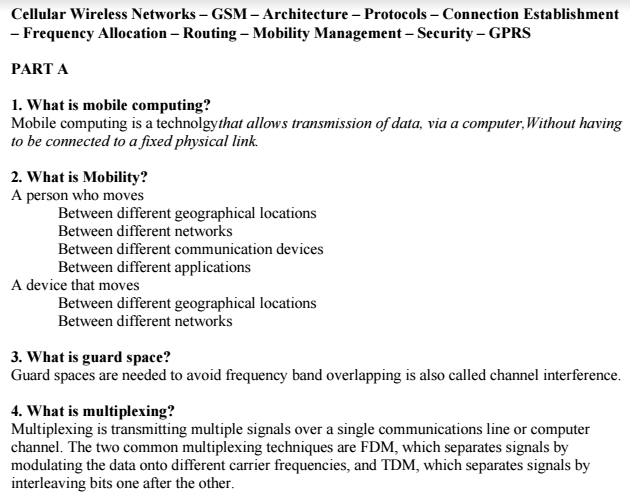 DEPARTMENT OF COMPUTER SCIENCE AND ENGG

UNIT I MOBILE NETWORKS 9
Cellular Wireless Networks – GSM – Architecture – Protocols – Connection Establishment – Frequency Allocation – Routing – Mobility Management – Security – GPRS
PART A
1. What is mobile computing?
Mobile computing is a technolgythat allows transmission of data, via a computer,Without having to be connected to a fixed physical link.

5.What is FDM
FDM is frequency division multiplexing which describes schemes to subdivide the frequency dimension into several non overlapping frequency bands.

7. What is dwell time?
The time spend on a channel with a certain frequency is called the dwell time

8. What are the two types of hopping sequence?
1) Slow hopping 2) Fast hopping

12. What is GSM?
GSM is group special mobile.GSM is the successful digital mobile telecommunication system in the world today.

13. What is authentication centre?
As the radio interface and mobile stations are particularly vulnerable a separate AuC has beendefined to protect user identity and data transmission. The AuC contains the algorithms for authentication as well as the keys for encryption and generates the values needed for user authentication in the HLR. The AuC may, in fact, be situated in a special protected part of the HLR.

17. What is GPRS?
GPRS is general pachet radio service.

18. Specify the steps perform during the search for a cell after power on?
<PDF Download>

19. Explain about transparent mode?
The transparent mode transfer simply forwards MAC data without any further processing. The system then has to rely on the FEC which is always used in the radio layer.

21. What is GPRS?
GPRS is general packet radio service.

PART A
<PDF Download>
PART B
6. Write a short note on Wi-Fi andWiMAX.

4. Give the applications of pervasive computing.
Healthcare, home care, transport andenvironmental monitoring are among the most frequently cited.

5. List the devices used in pervasive computing.
PCS devices are likely to assume many different forms and sizes, from handheld units (similar to mobile phones) to near-invisible devices set into ‘everyday’ objects (like furniture and clothing). These will all be able to communicate with each other and act ‘intelligently’. Such devices can be separated into three categories:
• sensors: input devices that detect environmental changes, user behaviours, human commands etc;
• processors: electronic systems that interpret and analyse input-data;
• actuators: output devices that respond to processed information by altering the environment via electronic or mechanical means. For example, air temperature control is often done with actuators.

6. What is device connectivity?
Pervasive computing systems will rely on the interlinking of independent electronic devices into broader networks. This can be achieved via both wired (such as Broadband (ADSL) or Ethernet) and wireless networking technologies (such as WiFi or Bluetooth), with the devices themselves being capable of assessing the most effective form of connectivity.

7. Define user interface in Pervasive computing.
User interfaces represent the point of contact between ICT and human users. For example with a personal computer, the mouse and keyboard are used to input information, while the monitor usually provides the output.

9. How is privacy, security and safety defined in pervasive computing?
Pervasive computing systems may have implications for privacy, security and safety, as a result of their ability to:
• gather sensitive data, for example on users' everyday interactions, movements, preferences and attitudes, without user intervention or consent;
• retrieve and use information from large databases/archives of stored data;
• alter the environment via actuating devices.