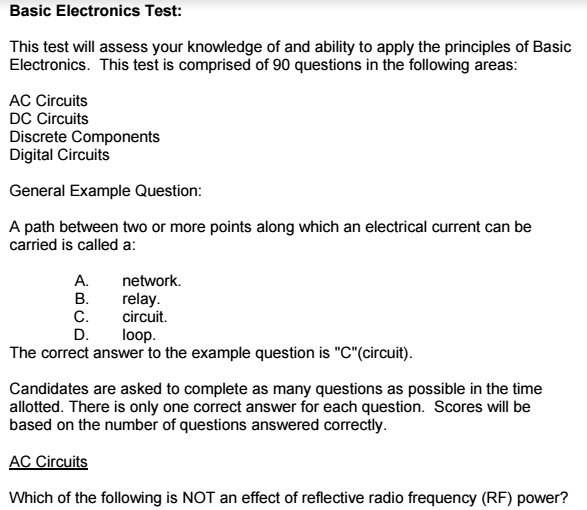 A path between two or more points along which an electrical current can be carried is called a:
A. network.

The correct answer to the example question is "C"(circuit).

Candidates are asked to complete as many questions as possible in the time allotted. There is only one correct answer for each question. Scores will be based on the number of questions answered correctly.

Which of the following is NOT an effect of reflective radio frequency (RF) power?
A. Frequency shift
B. Poor power transfer
C. Radiation of noise
D. Increased heat in the source
Answer: A

Reflected RF power works to partially negative the Forward power resulting in poor power transfer and potential radiation of RF noise. The reflected power typically is dissipated in the RF source as heat but there is no shift in the RF frequency.

The following resource is associated with the next question.

The following resource is associated with the next question.
In the circuit shown, the output at B is:
A.
B.
C.
D.
<Download PDF>
Answer: C
The circuit is an inverting amplifier. The output will be in the same form but inverted from the input.

General Example Question:
Time is the:
A. duration between two well-defined events. B. ratio between velocity and acceleration. C. product of energy and power. D. distance light travels in one second.
The correct answer to the example question is "A" (duration between two well- defined events).
Candidates are asked to complete as many questions as possible in the time allotted. There is only one correct answer for each question. Scores will be based on the number of questions answered correctly.

If a gas in a fixed volume container is heated, the resultant pressure on the gas:
A. remains the same.
B. increases.
C. decreases.
D. is inversely proportional to the heat.
Answer: B
The pressure of a gas in a closed container increases as it is heated.

It takes 30 minutes to complete a reaction at 150 K. Which of the following is an estimate of the time required to complete the same reaction at 300K?
A. Less than 15 minutes
B. 15 Minutes
C. 60 Minutes
D. More than 60 minutes
Answer: A
A chemical reaction occurs at a faster rate at higher temperatures.

Physical Concepts
Energy is the capability or ability to:
A. do work.
B. cause gravity.
C. destroy charge.
D. increase time.
Answer: A
By definition, energy is the ability to do work.

Applied Electrical Test:
This test will assess your knowledge and ability to apply the principles of Applied Electrical concepts. The test is comprised of 27 questions in the following areas:
Industrial Controls Power Supply Concepts Mechanics & Electrical/Mechanical Shop

A measure of how much a force acting on an object causes that object to rotate is called:
A. resistance.
B. compression.
C. tightness.
D. torque.
The correct answer to the example question is "D" (torque).

Candidates are asked to complete as many questions as possible in the time allotted. There is only one correct answer for each question. Scores will be based on the number of questions answered correctly.
Industrial Controls
The following resource is associated with the next question.

Compared to an effective voltage of 120 VAC, the average heat energy out of a resistor is __________ for a voltage of 120 VDC.
A. the same
B. higher
C. lower
D. nonexistent
Answer: A
The “effective voltage” is commonly referred to as “rms value”. The rms value of an alternating sine wave corresponds to the same amount of direct current or voltage in heating power.

C. The output and ripple voltage would be greater than expected.

D. The output and ripple voltage would be less than expected.
Answer: B
The output filter capacitor functions to “level” the voltage output of the power supply. A higher value capacitor would be more effective in filtering, or leveling the output which would result in a slight increase in the voltage present across the capacitor.

Power Supply Concepts
The following resource is associated with the next question.
In the power supply shown, the wave form of the output across RL is:
A
<Download PDF>
B
C
D
Answer: A
The frequency of the bridge rectifier output will be 2x the input frequency with all points of the waveform being above the “0” zero line. Capacity C1 provides filtering to smooth the waveform across the load.

Mechanics & Electrical/Mechanical Shop
What are the characteristics of a coaxial cable?
A. It has twisted pairs with a shield.
B. It has a center conductor covered with an insulator, then braided
or solid outer conductor and then insulation.
C. It has heavier insulation than most cables.